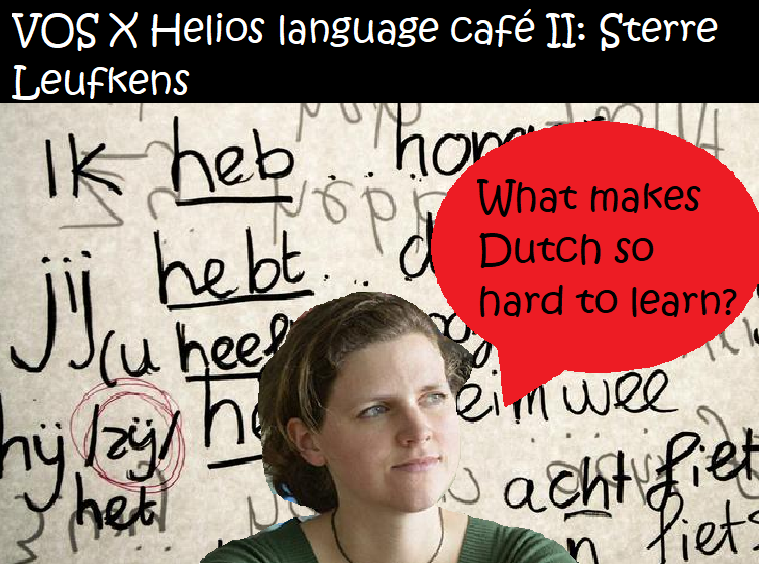 For this language café VOS and Helios formed a team and invited Sterre Leufkens to talk about her two research projects on language acquisition.

About the research projects of Sterre Leufkens:

Are you learning Dutch, or do you know anyone that does? Then you’ll probably agree when I say that Dutch is a really difficult language. Why is this the case? What makes Dutch so hard to learn? Is it more difficult than other languages? And is it as hard for children as it is for adult learners?

In this talk, I will go into two of my research projects. I’ll first discuss my PhD, in which I compared twenty-two languages from all over the world on their degree of transparency. I’ll explain what that term means, and how it is related to matters of complexity and language learning.

Then, I will tell you about the app I am currently developing, containing overviews of crucial differences between Dutch and languages spoken in the Netherlands. Which acquisition problems can be related to differences between languages, and which are general learning problems?

Dr. Sterre Leufkens studied linguistics at the University of Amsterdam. In 2015, she completed her PhD, a typological study on the transparency of natural languages, at the same university. As a postdoc researcher at Utrecht University, she studied the syntax of idioms in dialects of Dutch. Currently, she is working on the development of an app that aims to professionalize teachers of Dutch as a second language.

The focus of Sterre Leufkens’ research has been the relative learnability of languages, their grammars in particular. She is also interested in theoretical linguistics, and has worked with both formal and functional frameworks. Besides her academic work, she has published popular-scientific blogs, articles and books on language and linguistics.